I’d never seen a bee as big as Death Bee, a bee so large I noticed him by his shadow first, a disc out of the corner of my eye that had to be either a fairy or—hope against hope—an honest-to-goodness hummingbird. I live in Detroit. I’ve seen a hummingbird once in my 50 years here. A half-century missing the simple magic of that. Except fairies and hummers didn’t buzz, and when I say “buzz” I mean vibrate, and when I say “vibrate” I mean Rodan. In the span of 5 seconds I went from guy sitting in his backyard trying to read a book over the noise of the neighborhood, to facing head-on the truth that here there be monsters. Death Bee.

Fat but agile as a guided missile. Black and yellow war bands. Wings that likely cut flesh. Six hairy trunks that served as legs. ‘Roids or insane workout sessions, who knows? I only knew I’d never seen a bee that large. He might have been one of the mutated Africanized killer bees whose coming was part of city-lore since the 70s. (It was hard enough as a Black kid to find positive reflections in the United States, now I had to worry about African bees adding to the false threat narrative too?) Would an Africanized killer bee respect diasporic brotherhood? No, it would impale me on the 8 inch switchblade it hid in its ass. I’m a big man. 6’2”. Couple hundred pounds.

Which is to say that I ran. 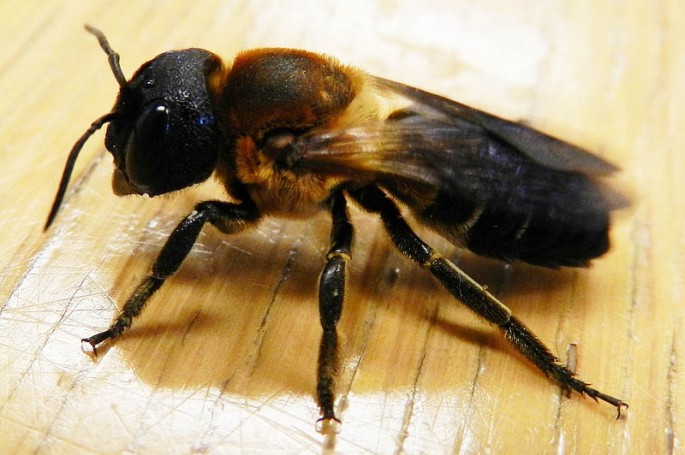 Death Bee didn’t follow. It staked out a position near the section of my privacy fence closest to the back porch (1: my reading spot; 2: of damn course) and patrolled. If I came near that spot it advanced. I backed away, he resumed normal military stance. There were no flowers there. Nothing of obvious value to Death Bee or any other bee. I had to assume this was a show of force as a prelude to invasion.

My backyard was the only peace I had in this hellish neighborhood, and that only when most of the neighbors remained indoors. I was not giving that up. I recall thinking—as I dashed up the porch steps, threw myself at the door, and hoped to all gods that anyone bumbling into my yard didn’t suffer too much—This far, no further. Research elevated Man from bee. I didn’t want to do a whole scorched-Earth campaign of the backyard. There were tomato plants and zucchini growing back there, for gods’ sakes.

I looked out the window and I saw Death Bee patrolling and I knew that, as frightened as I was, I would not kill. It’d be too much like watching Godzilla die, and nobody…nobody needed to see that.

Non-lethal measures it was, then. I consulted the greatest source of life I knew: Catherine Winter, writer, artist, grower, high priestess of Whee. I truly didn’t want to kill anything in the yard (collateral damage to centipedes and mosquitos: acceptable); regular bees and crickets and spiders—they all had their places. A Death Bee, though, was an affront to gods and civilization. Especially one with so much attitude (I swear I saw it watching the back door, waiting for me to come out, Rambo face paint across its fuzzy face, red bandana ready to slowly tie across its forehead). I knew there were a billion chemicals I could use, but I also knew that when I used those chemicals (and yes, I have) and the wind blew any of their spray back toward me I ran like mad from caustic cancer fleshburn hell.

I opened the back door. It was early. It was quiet. Won’t say “too quiet” because, y’know, effing city life, but the air was still on that summer day. It was as if the Earth wanted me to listen.

Then I heard it.

Death Bee didn’t merely buzz. Death Bee was a running chainsaw perched on the edge of the bathroom sink and about to fall onto a baby, and you knew you had to catch it in your bare hands no matter what. That’s the flavor of dread that sudden abundance of zzzzzs elicited. The inevitability of doom. The reminder of mortality.

I ran outside to take its measure, curiously emboldened by my fear. Death Bee hovered into view, darted at me (by then I was already halfway across the lawn. Yes, I waved my arms and hands spastically aloft. Why do you ask?), then resumed stealth mode by the fence. What about that section of fence made it so appealing? It was an old, rickety wooden fence. Death Bee was no borer bee, no. Death Bee was munitions. He’d be the first one pushing the plunger down to blow the fence so neither of us could have it. So I began to wonder was there something on the other side he was protecting? Some huge Kalahari Death Bee mound in my neighbor’s yard behind the vines and weeds he never got around to attending abutting the fence?

I tuck-n-rolled back into the house and considered things. The neighbor had dogs, so I didn’t want to spray over the fence. I would be precise with my nuclear-option sprayer. I would wait until very early the next day, attach the sprayer to the hose, and begin.

The neighborhood would learn to love the smell of Neem in the morning.

Neem actually smells quite good. An oily, minty, brown mouthwashy goodness. If I were Death Bee I’d stand in the stream of the spray with my mouth open and thank me for the service. But I trusted Cate’s wealth of knowledge. If there’s one person I’d follow into purgatory to plant a small patch of seeds, it’s Catherine Winter. So I sprayed. I sprayed the entire length of the fence. I sprayed the porch. No sign of Death Bee, so I sprayed again. I went inside, let it dry, and came back out. There was no Death Bee.

He rotored quickly into view and he was pissed. In my mind I countered with I pay the ridiculous mortgage on this house! anger for anger. The Neem was supposed to have worked! I didn’t have a baseball bat or a sword but I did have a flyswatter. If Death Bee wanted a piece of me he was going to have to come get some.

But then I remembered that my brother was deathly allergic to bee stings; that I’d never been stung; that I did not want to learn by field study if I was deathly allergic, and that I’d once had a bee fly up my shirt sleeve and terrorize me for either 5 hours or 8 seconds—who can tell?—by pretending it wanted nothing more than to get out. My mother told me to be still and it would fly out, but, as Lou Reed sang in Last Great American Whale, you can’t always trust your mother. I whipped my arm around and flung it out like a sling. I also ran like hell when it came out. Past is future.

Memory exists to keep us from killing ourselves repeatedly.

More research was needed. I knew that bees were endangered but I didn’t think they were endangered in my city. I knew bees weren’t wasps (assholes) or yellow jackets (assholes). I knew the old saw that if you left bees alone they’d leave you alone. But Death Bee behaved as if he were the Amun-Ra of bees: he had no fear, brooked no trespass. And he apparently snorted Neem like cocaine because he’d gotten increasingly Tony Montana-ish.

What I did not know, however, was that bees weren’t a no-have option. Bees were dying. Everywhere. It seemed unimportant…until you researched it. You realized not only were they important, they were crucial to every benefit we receive from agriculture. Bees were frikkin’ life. A butterfly’s wings might cause a tsunami but a bee’s butt gave us string beans and yams. One way or another, they gave us string beans and yams.

Was there a way to live with Death Bee? Of course not, he was maniacal. But I will admit to respecting him a wee bit more. Also, I neemed the hell out of that space for the rest of the week. An absolutely unbelievably minty fresh yard. Some days Death Bee was there, some days not. 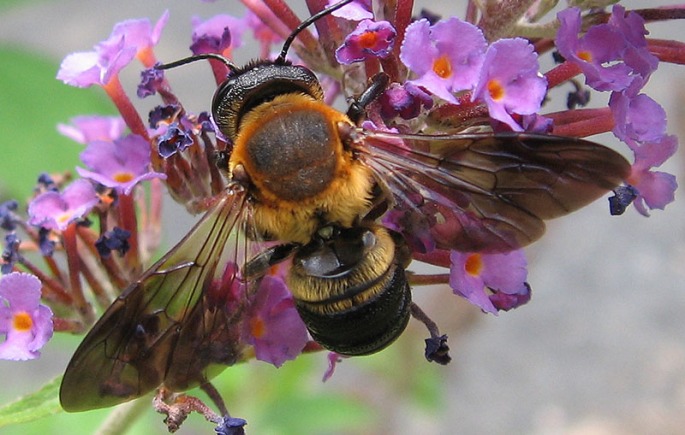 Until one day he wasn’t. And the next. And one more. Understand, I’d never seen a single other huge bee besides Death Bee this entire time. Or let’s say I never saw more than one Death Bee at a time, one huge bee that would register on a scale and grin an evil grin about it. I never found out what kind of bee it was. Never knew where it came from, why it picked my yard, where it went. I knew, however, that I’d never buy a commercial insecticide again. Regular bees flitted among the flowers of my zucchini plants. I was cool with them. I had no desire to harm anything outside, really (except centipedes and mosquitos. Maybe flies). I could live on this planet; they could live on this planet. I could read; they could pollinate. And if ever there was contention, it could be handled without loss of life. That’s a small epiphany but it’s huge.

So was Death Bee some guide sent to teach me a lesson? The lesson being neem oil is addictive to humans. Could be. Maybe I’d forgotten to appreciate the bio part of life as I’d sat there that summer day with the guts of a dead tree dipped in magic in my hand (if you want to know what I was reading, it’s called There Is No Lovely End by Patty Templeton; writer love 4 ever yo). That’s very likely. We all know bees are dying everywhere. We know lots of things are. And we know pretty much we’re the ones killing them. Conglomo-murder. We’ll kill anything if it lands on our plastic fork at a picnic.

But a lot of us aren’t interested in killing. We just want to read good books in the summer air and chill.

While keeping watchful eyes out for any Death Bees we might find.